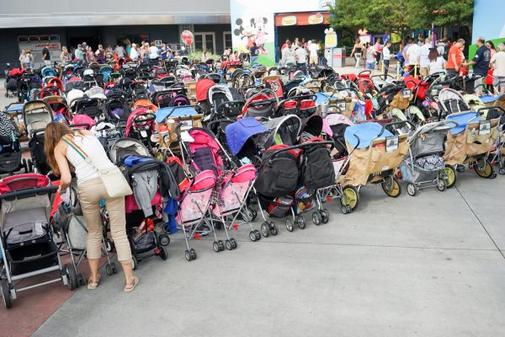 So how does this whole renting a stroller thing work?

Though it may sound weird, renting a stroller for your Orlando vacation may be one of the best purchases of your trip. We deliver the stroller to your resort, hotel or vacation home at the time you chose. You use the stroller like if you had brought your own. They come in especially handy when kids are tired, you're tired and you're heading out of the parks. On your last day, you will return the stroller to the same place where you picked it up ( usually the bell desk ) and we will come and get it. No fuss, no cleaning and no packing. We make every effort to keep things as simple as possible.

With an average of about 50 miles of walking during a 1 week Disney World trip, it makes sense to consider strollers for many kids, even some who have outgrown using them at home. Having a stroller will make navigating through the Disney parks a lot easier, too. stroller rentals

Another reason to consider using a stroller is for safety reasons. Walt Disney World can get crowded, particularly during high peak times such as when the park closes or during the fireworks. Even if you’re holding your child’s hand, it is possible to lose them in the melee of all the activity going on around you. To avoid separation, and to avoid your child accidentally getting stepped on by another guest, it really makes a lot of sense to utilize a stroller where you are in charge of the direction and pace of movement.

A great tip! Place a towel in your stroller while you are at Walt Disney World, it can be used to clean up spills, serve as a blanket or sun-shield, or pad the seat for your child. Also, you won't want to leave important or valuable gear in your stroller, as it is vulnerable to the weather and to theft. Do not leave anything of value in your stroller, however, many people do leave their diaper bags.

Furthermore, Disney cast members frequently move strollers around in the stroller parking area. It might help to tie something to your stroller handle (a balloon or a scarf) to identify it as yours.

Also note that strollers are welcome inside Disney’s Typhoon Lagoon Water Park and Disney’s Blizzard Beach Water Park, but they are not available for rental in these parks.

Can I bring my stroller in the lines for the rides?

No. There are stroller parking lots located throughout the theme parks where you can leave your stroller and walk to each attraction.

Does Disney allow you to bring your own stroller into the parks?

Yes. Disney World theme parks (Magic Kingdom, Epcot, Disney’s Hollywood Studios, Animal Kingdom) and Disney resorts allow you to bring your own or a rental stroller to the parks.

Can I use a stroller lock?

No. Stroller locks are not permitted at Walt Disney World.

Disney World has what they call Featured Providers.

Disney Featured Providers are vendors who are pre-vetted by Disney, and they’re the only vendors who are allowed to drop off and pick up your stroller at the resort without you being there. That’s a huge advantage.

Why would I rent a stroller?

There are some very good reasons to rent a stroller, even if your children don't normally use a stroller at home. Walking around a theme park all day can be VERY TIRING. As an adult, you will feel it. Now imagine littler legs trying to keep up all day. Giving them a ride around the park will not only save them from getting as cranky, but will save you from some of that mid-day frustration. These parks are big...I mean big and you can easily walk a couple of miles a day just jumping from one side of the park to the other.